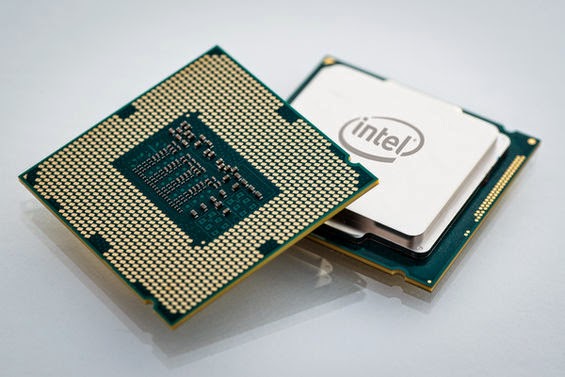 Intel has upped the bar again, with eyes set on faster CPU and storage technologies, improved security, and of course, your wallet. Up next in the technological arsenal that is Intel, they have finally released their Z97 or series 9 chipset – Code Name “Devil’s Canyon” (awesome, right?) along with a new line of Processors.  I’ll give you the highlights here for what you can expect.

First up is SATA Express – the long awaited heir apparent to current SATA hard drive architecture.  SATA Express is being integrated into the Z97 chipset and utilized by SATA-Express supported drives.  The big benefit – a data channel up to 300% faster than current Hard Drives.  What this means to the average consumer: it’s waaaaaaaaaaaaaay faster.

The next of these improvements includes support for M.2 SSDs, which is the replacement for the currently used mSATA. These are the small SSD’s typically seen on many ultrabook models In the real world, they promise read/write increases up to 35%.  Again, faster = better.

As far as processors go, we have Devil’s Canyon CPUs in i7 .  Intel has unlocked each and every of the new Devil’s Canyon processors, providing a better overclocking experience and enhanced performance right out of the box. Not only are these the first desktop platforms to support the soon-to-be-released DDR4 memory, but the forthcoming models will bee the first 8-core desktop processor. These are meant for PC enthusiasts, starting at an amazing 4.0Ghz and a speed boost clocking in at 4.4Ghz, a first for Intel.

Now for protection, Intel has added a security feature is called Intel Device Protection with Boot Guard, a business-class security that works by combining software and Haswell architecture hardware to boost your effective chances of staying clean from malware and rootkits being installed.

All in all, it seems like a good step for Intel, but to whom? The Gaming and Power Users, sure, but for the your basic web browsing/office work types, it’s really overkill.  There’s  very limited availability of SATA Express or M.2 currently, and they’re probably still a ways away from qualifying for a good “bang for the buck” as they say.  So unless you’re one who needs the latest and greatest, it probably won’t pay off to be an early adopter. Big name brand PC’s probably won’t roll out Devil’s Canyon Models for a few months.  Those new Hard Drive technologies aren’t coming until Christmas most likely.

Let’s not forget, these new enhancement are going to come at a premium and it’s up to you early adopters to act as beta testers.  But like Maverick once said to Goose: “I feel the need.  The need for Speed!”  Guess you can count me in for two.